skip to main | skip to sidebar

Yesterday was my blog day on Blogging In Black. Check out my post, "Writers, Get Your Hate Up."

Read more...
Posted by Cherlyn Michaels at 4:27 AM Links to this post 4 comments

Yesterday, I went to Barnes and Noble with the intention to write. I often take my laptop there, pick up a book or magazine, read a little, then write. I skimmed the latest issue of Poets & Writers and the July issue of The Writer. I got a lot of useful information out of it, so I decided to buy the August issue. I used to be an avid reader of Writer's Digest and I've gotten away from it. I think these magazines have brief perspectives on the elements of writing that spark inspiration and drive in writing. I immediately came home and went through my outline to ensure that I had conflict in every chapter. That was one of the articles. It talks about keeping the reader interested in your story once they've gotten beyond your great beginning. The way to do that is to ensure that there's conflict in every chapter. Now, actually, I understood this before. When I do my plot outline, I write it by the major action of each character in that chapter. However, I wasn't specifically focused on the level of conflict in that chapter. I think this focus will help me to improve the story.

Um...it also had an article on, basically, writer procrastination. But hey, I did go home and get my writing in. :-)

I think it's time to subcribe to writing magazines since Zinio doesn't offer a digital version. :-( I have a couple of subscriptions there and it's great! You can read your magazines online or download them yourself. I like it because I can keep my magazines on file instead of trying to keep a physical copy around when I want to save an article, which usually adds up to clutter. So, guess I will have to have actually magazines delivered. How old school is that?!

Read more...
Posted by Cherlyn Michaels at 8:00 AM Links to this post 3 comments

Made it through another week and another two chapters. I've finally found my writing rhythm in Georgia. :-) During the week, I get up and write a little before work, but I'm finding that a bulk of my writing is on the weekends. I'm inching along on the novel, but moving nonetheless. Moreso that I've had the time to do over the last couple of years.

I'm also reading while I go. Reading books on writing. What I'm reading now is Hooked, by Les Edgerton. I'm at the beginning, reading a few pages before I write or at night before I go to bed. It's very interesting to me so far. Les talks about the change in story structure over time and I'm finding it quite true. It correlates to what I've learned in writing courses as well as being a published author. He's talking about stories staring with an inciting incident, then following through with the protagonist trying to reach resolution. Backstory and narrative being primarily throughout the story, rather than the big set up at the beginning of the story and with each scene.

Before I even picked up this book, this is what I was striving to do with my current novel. I got a lot of feedback on the descriptions in my first two novel. Yet, I also got feedback because it was "slow to start." At the time, I honestly couldn't understand it, because I felt I needed it to get readers to understand the characters and their motives. NOW, I see where I can jump right into the story, and insert background in small spurts as I go.

I'm getting to see how fun it is to try to improve and change with each book you write. It's like each one is a stepping stone and an evaluation tool for the next one in determining how to make your writing better.

I'm looking forward to another writing weekend and to completing more chapters!

Read more...
Posted by Cherlyn Michaels at 4:56 AM Links to this post 2 comments

I'm like having the most relaxing morning ever! I don't think I've had a morning since I've been here where I'm not getting up, ripping and running all day, doing this and that, then trying to squeeze in some writing. So this weekend, it's reversed. I'm having my coffee and 8:30AM. I'm sitting here calmly drinking it, reading blogs, and blogging myself.

Then I'm going to go to the gym. Get my workout on for about an hour and a half. Lost 5 pounds in the last 10 days. Now I'm focusing on the next mini-goal of 3 pounds by next week.

Then, it's writing ALL DAY!!!! Nothing else pressing on the agenda. Now, if I can, I will squeeze in finally shelving my books and removing all the packaging from moving that I have stored in the dining room. But that's not pressing. :-)

It's going to be a wonderful weekend. Hope yours is the same!

Read more...
Posted by Cherlyn Michaels at 8:37 AM Links to this post 3 comments

I just realized something. I'm an addict. A political addict. A political junkie. I recently posted to a fellow author's blog about dating at work and her writing referenced Rocsi and Terrance at BET and the drama behind her not being on the show anymore. Another author posted about a newly married "Hollywood" couple. I knew who the bride was, but not the groom. Still wondering if he's supposed to be famous or a behind the scenes type of person. Well, I was out of the loop. That's where I find myself quite often when reading blogs about entertainment people and industry.

And I had to sit back and think about it. The reason that I'm out of the loop is because when I get home, I immediately turn the TV on to MSNBC to watch all the political shows. I have to have the TV on while I sleep, and I leave it on MSNBC. If you're a fan of MSNBC, you know that overnight and through the wee hours of the morning, they just repeat the shows. Well...I watch/listen to the repeats. I mean, as if I'm seeing them for the first time. Now, from time to time, I feel that the repeats are too much, so I WILL change the channel...to CNN. Or even Headline News when CNN is running a non-political story.

And I thought about it. This is not new to me, at least in this election season. I did the same thing during the Bush-Gore election season. I watched all the political shows on them day and night. I can actually remember being up in my bedroom with Tom Brokaw, watching the all night count of the popular votes, the Florida votes, to determine the election of the next President. And that election extended my addiction for a few additional months, due to coverage of the Florida vote. But after this election is over, no matter who wins, I know to be prepared for withdrawals, like right after the Bush-Gore coverage was over. I just didn't know what to do with myself. There was a certain emptiness that existed. A void that watching just regular local or national news couldn't fill. So, I got to prepare myself for the big let down come February 2009, after the presidential inauguration.

What's most baffling is the reason for my addiction. Because you're usually addicted to things that make you feel good. But often times, while watching these political shows, I'm either angered or disgusted. Yes, more informed and more aware, but more irritated as well. I get irritated when either side blows up a blunder of the other side. Especially blunders in words. I get angered by mischaracterizations and harping on them. I get angered by the constant talk of issues that are not the top issues of most Americans. I get angered by catch phrases and labels that are developed, repeated constantly by the media, and weaved into the minds of average Americans.

It's funny to me when regular people are interviewed, asked a question about a candidate, and they can basically only regurgitate what they heard about them on TV. In the rare instance that the reporter and show is unbiased and ask the individual for examples of what they speak of, they rarely can provide one, unless an example has been reported over and over by the media. I listen to it all and like to think that I'm not falling for the ridiculous. I like to think that I recognize when things are blown out of proportion, when points are exaggerated, when I'm being bullshitted and being sold a dream just to get elected, and when there's an attempt to brainwash me. It baffles me how some of the other intelligent people who are interviewed on TV don't seem to see this.

Read more...
Posted by Cherlyn Michaels at 3:54 AM Links to this post 0 comments Okay, here's a picture of me posing with one of my bike club members with my new hair style. Ahhhhh! No more braids. What do you think?

It's been funny. Since I've moved here, a lot of my friends and family are saying, "So you move to Atlanta and now you're spicing things up a bit." LOL I guess that has been true, but not because I moved near Atlanta. I felt so good with the move and change in life and the first thing I vowed was to get healthy. Exercising and going to the gym has never been an issue for me as far as forcing myself to go. I love working out. Music keeps me going. But consistency is usually the issue. Things come up and throw me off my routine. So, I've committed to becoming consistent. I've also commited to eating healthier and actually preparing my own food from time to time so I can control salt content. And I now drink about 10 glasses of water a day, which I noticed actually helps with the hair and skin. I was having skin issues when I got here and a trip to the dermatologist helped me to smooth out the skin on various parts of my body.

Well, you can't have great skin without improving the teeth. I've scheduled a dental appointment to schedule routine check ups and cleanings, and in the meantime, used whiting strips until I can get them whitened at the dentist.

Okay, with great skin, whiter teeth, and with feeling better from eating, water, and working out, a girl just HAS to get individual eyelashes, right? But of course. And you just can't get indivudual lashes without trimming up the eyebrows. That wouldn't be right! And with that focus in the facial area, you have to get new earrings. Yeah...that's it...new earrings. A NEED!

Getting the nails and toes done in french manicure was a must even before moving to Georgia. But with all of this, I just had to change up the hairstyle, right? I mean seriously, what other choice did I have?

And now, I'm back on the serious mission, as always, of getting to my ideal weight. Started last week and lost 3.5 pounds. Now, if I can just be consistent so I can stop losing the same 10 pounds over and over and over! LOL

Read more...
Posted by Cherlyn Michaels at 3:52 AM Links to this post 1 comments

Cherlyn Michaels is the author of Counting Raindrops Through a Stained Glass Window (Hyperion Books, 2005) and First Fridays (Hyperion Books, 2007). Cherlyn resides in Georgia where she works as an Engineer. She is currently working on her third novel and other writing projects. 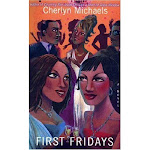